So this year I decided to do Elf on the Shelf, my daughter is 4 and I thought that she would enjoy it. Plus I thought that maybe it would hold her to some better behavior, no so so far. So last Sunday we are all home and I make some french toast for breakfast, we had a special guest at that table that morning… No one noticed him!!! I had to finally move him if front of my daughter (when she was away from the table of course) then she finally asked me “Mom is that from Santa?”

Why yes he is, lets read this letter he is holding…(please disregard my typo’s I was in a hurry) 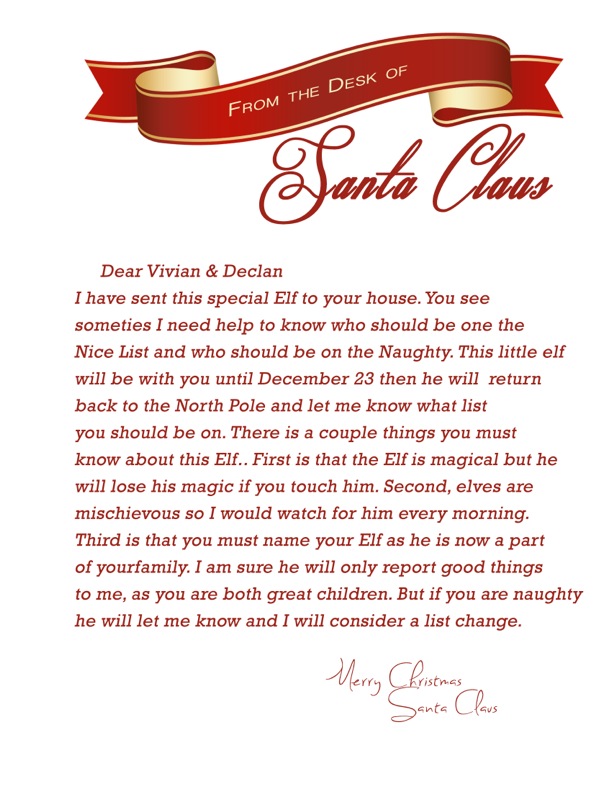 On the first day I may have forgot to have Eli do something fun. So instead he was tired and slept in the kleenex box. Day 2 he hung Vivian’s underwear from the ceiling fan and managed to get himself stuck! At first Vivian was convinced that I had hung them up there and that Eli was not magical. However later that day she told me to make sure he did not do that again! The next day Vivian’s toy’s got revenge on Eli, they taped him up on the wall!! But then again she informed that her toys don’t come alive, I must have done it.  So I had to remind her of one of her favorite movies, Toy Story, and how the toys come alive when no one can see  them. She was happy that her toys taped him up. She even added a few extra pieces of tape, one over his eyes. I said Vivian why did you tape his eyes? She said so he doesn’t see me when I’m naughty. Touché little girl. Day 4 Eli was back to his playful self. He made a snowman out of toilet paper!! The next day… he TP’d the Living Room! Things I Have learned in my first week of Elf on the Shelf: 4 year olds take some convincing that an Elf is magical, this elf thing doesn’t really make them behave better and I am pretty sure that I am having more fun then anyone doing this!!