I Made a Unicorn Valentines Box and So Can You

This is the first year one of my kids has had to make a Valentines box, other years they just made them at school, this semi-crafty mama was so excited! To add to my excitement Viv wanted to make a Unicorn Valentines box which meant lots of pink, purple and sparkle.

I had good intention of getting her Valentines box done early but of course we waited until that last minute to get it done. There was another snow storm on the horizon which meant a possible snow day, so I went to the local Walmart and bought all the supplies for the Valentines box. If you didn’t know I live in a pretty rural area and Walmart is the only store within an hours drive of my house, so I made do with what I found.

First thing you need is a box, I bought one but you can use one you have lying around the house too. Second most important item you need is double stick tape, this is a must. To make the box white I found this Cricut Vinyl roll that worked really well. It wasn’t see thru, it was easy to apply with some double stick tape and I can use it again on another project. I found pink and white foamboard for the ears and gold gift bags for the horn (you could just use gold paper but that is what I could find) Then tulle, tissue paper and curling ribbon for the fluff. You will also need some scissors and a black marker.

First I assembled the box and cut a hole in the top for her Valentines. I did not make a trap door in the back to retrieve the Valentines because Viv said she could just grab them out the top. I then covered the top of the box with pink tissue paper and rolled the white vinyl around the box, placing double stick tape as we went around.

Next I cut out ears from the foamboard, the white slightly bigger then the pink and taped them together. For the eyes I looked at examples on-line and then drew them on some white card stock and cut them out. This took a few tries but I think they turned out pretty good, even though I’m pretty sure they are upside down!  For the horn I deconstructed the gift bag and rolled into a cone. Everything was taped down with my trusty double sided tape, except the eyes we used glue just because the tape was too wide.

Then I made a bunch of small tissue paper balls, Viv even helped. They are fairly easy to make and here are instructions from One Little Project. I also made a couple little puffs from the tulle and cut some varying lengths to create the mane Viv requested for her Unicorn. After that it was just a matter of placing and tapping the items around the top of the box. Viv also cut out a few hearts from the extra pink and gold paper we had.

When you put it all together you have your Unicorn Valentines Box!!

Not too shabby, can’t wait to do it again next year!!

Check out the one time I tried to make a Unicorn Cake! 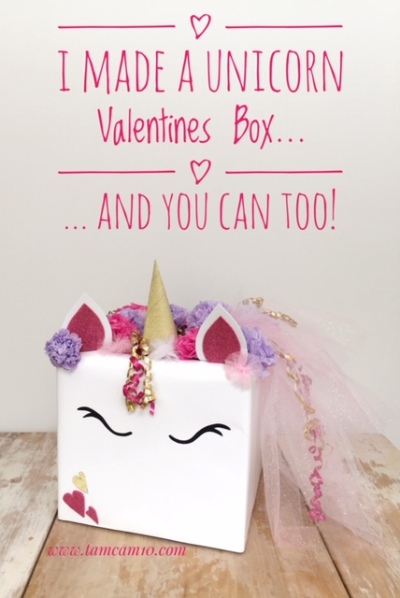