A while ago I found this bakers table at a little second hand boutique. I hemmed & hawed over buying it and walked away because even though I really liked it I couldn’t see a need for it in my kitchen, after all it is a bakers table. After going home empty handed my mom, the clever lady she is, suggested that I could use it in my laundry room as a folding table. Where was this idea yesterday?!?! Since the store we only open for three days I hurried back and bought the table!

Now that I had the table, how was I going to make it over…. I have this Canvas Laundry Cart that I wanted the table to compliment so that was my inspiration for this makeover. First thing that had to go were the wheels, they didn’t roll very well so they were useless.  Then the handles needed to be replaced, I wanted something more bold, so off to Menards I went. Originally I wanted Black Bin Cup handles but since I was covering up existing handle holes I went with this style of Cup Pull. 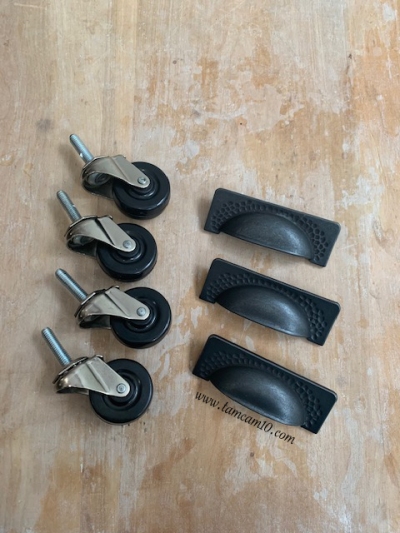 For the paint I knew that I wanted to use chalk paint primarily because I like the finished look of it. The Canvas Laundry Cart has a strip of grey on the top so I decided that I would paint the table grey. There was also going to be distressing so that the table didn’t have a perfect finish and I needed some under colors. I decided on using Waverly Inspirations Chalk Paint in Mineral for my overall color, then Elephant and Moss for the undercolors. (I did not end up used the Ivory for this project)

I finally had the time to tackle this project and with the cutest helper ever. I told him that we need a flat screw driver to get the handles off, before I knew it he comes back with a cordless drill and starts taking them off! He is 5! I just watched in awe as he looked like he had been using the drill for years. Then he and grandma drilled me new holes for the pulls. We also replaced the wheels right away so I could easily turn it around while painted. I sized up the wheels after I bought them and originally thought I would have to drill bigger holes for them to fit but after removing all the parts of the old wheel the holes were a tad too big. That was nothing a little hot glue couldn’t fix.

On to painting, well prepping first. With chalk paint one of the big hypes is that there is no prep work needed, I disagree with that. If you are painted a new piece of furniture sure, but this table had old glossy paint, food stuck on it and cobwebs. I gave it a once over with some fine grit sandpaper and then ran a tack cloth over it before any paint touched the surface. First I applied the under colors, Elephant and Moss, with a 1in Chip Brush. First I applied the Elephant in random long vertical strokes covering just over half of the table base. I left that dry to the touch and then went in with the Moss and applied it in the same fashion covering up more of the white and also over some of the Elephant. When that step was done I ended up with a camouflage look.

I let that dry for about 2 hours and then covered it all in Mineral  using the Waverly Chalk Paint brush, but found out that the bristles kept shedding so I wouldn’t recommend that particular brush. The size of the brush worked well, it was about 1.5 in wide. I applied the paint in long vertical strokes, except around the top and bottom where the wood was horizontal. Let that layer dry for 2 hours and then applied another layer of Mineral. After all the paint was applied it was late and I let it dry overnight.

The next morning I started off distressing the paint with some 200 grit sandpaper. I wanted it to look warn and tried not to make patterns in my distressing. Trying to be random is harder than you think. I would work on a part and then move around and come back and sand some more. The edges and corners come off the easiest and if this were natural distressing where you would see the most wear and tear. There is no right or wrong way to distress just do it too your liking.

After distressing I wiped it clean with a tack cloth and moved on to the final step, waxing. Waxing is fairly easy and goes way faster than painting. I would recommend you use a Waxing brush for this step, just not the one I used. After applying let it dry and you are ready to enjoy all your hard work.

Since I don’t have a laundry room just yet, I staged one for this finished look. It goes great with my Canvas Laundry Cart and can even double as extra seating when you have guest over. I can’t wait until the house is finished (or started) and I can get it over there even if it does mean I will be doing laundry!

On to my next project for the house that (still) isn’t built….